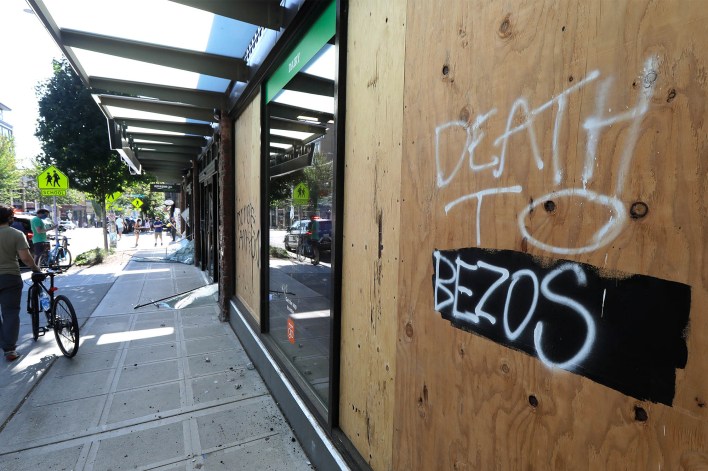 Graffiti on a boarded up window of an Amazon grocery store.
AP Photo/Ted S. Warren

Amazon is taking steps to allow employees to work outside of the city, which has been plagued in recent months by both coronavirus and Antifa violence.

On Thursday the company sent a message to their employees in the city floating the possibility of other nearby municipalities they might be comfortable living in, Bloomberg reported.

Among the ideas floated were nearby Tacoma and Redmond.

“GREF (Global real estate and facilities) is always exploring real estate options to support our diverse and growing population, and is considering new locations in the Puget Sound region (in addition to Seattle and Bellevue).” the message read.

Amazon has lately has a rocky relationship with Seattle, where it employs around 50,000 people. It has been expanding for years into new locations with major new offices planned for New York City and the Virginia suburbs.

In recent days the city has also been rocked by Antifa violence, as gangs of marauding protesters have destroyed property — often facing little resistance from police. The city’s Democratic mayor Jenny Durkan is currently facing a recall effort for her role in surrendered a large slice of downtown Seattle to the Capitol Hill Autonomous Zone.

Labor Day gas prices are the cheapest in years

Riskier Than A Bear? Why This Market Is So Dangerous