The U.S economy rebounded with surprising strength last month as businesses began to reopen from the coronavirus lockdown. U.S. employers added 2.5 million jobs in May, and the unemployment rate fell to 13.3%.

It was a stunning turnaround from April, when the U.S. lost nearly 20.7 million jobs, slamming on the brakes of the economy in a desperate effort to slow the spread of the pandemic.

“Now we’re opening and we’re opening with a bang,” President Trump said, during a celebratory appearance in the White House Rose Garden. “This is a rocket ship.”

May’s unemployment rate is still extremely high by historical standards, but much better than forecasters were expecting. It reflects an improvement over April’s jobless rate of 14.7%.

Stock indexes opened sharply higher after Friday’s jobs report was released. The Dow Jones Industrial Average jumped 715 points or 2.7%, and the S&P 500 was up 2%.

The pace of pandemic layoffs has slowed in recent weeks. And some people who were idle in April were called back to work last month as business started to reopen.

Hairdresser Megan Hanneken has not been recalled yet, but she expects to go back to work in a few weeks as Michigan relaxes its stay-at-home orders. Her customers have been getting impatient.

“I’ve never felt so valued as a hairstylist, which is wonderful,” Hanneken says. “But I also want to laugh when people are so upset about their hair. I’m like, ‘You guys, it’s hair.’ “

Hanneken says she’s prepared to take precautions to avoid spreading the virus, but she’s not looking forward to wearing a mask all day or trying to cut hair with gloves on.

“I’ve seen pictures — during the 1918 flu pandemic — of open-air beauty salons. People were cutting hair outside,” she says. “How I wish that were the case now. That would be so preferable to me than being in a hot salon with a mask on.” 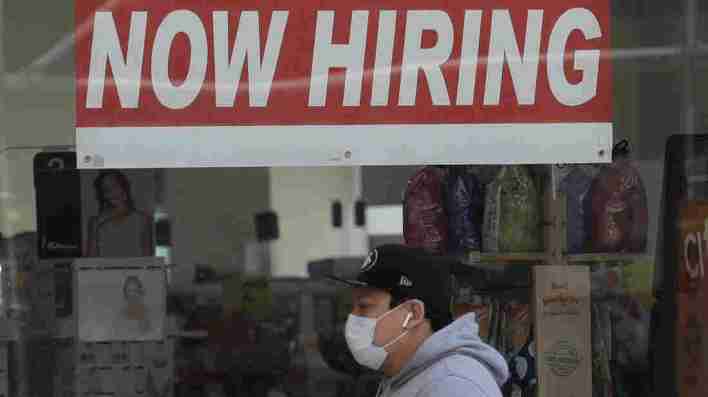 A man walks by a CVS Pharmacy in San Francisco on May 7. U.S. employers unexpectedly added jobs last month as the unemployment rate fell. 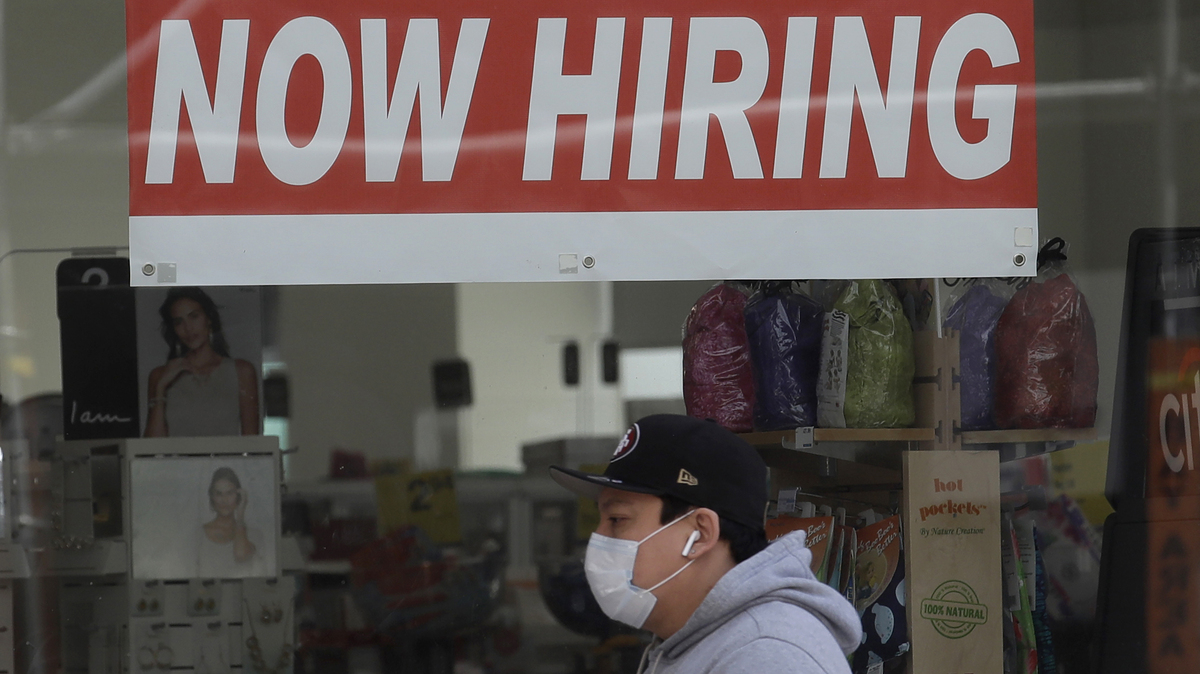 A man walks by a CVS Pharmacy in San Francisco on May 7. U.S. employers unexpectedly added jobs last month as the unemployment rate fell.

Michigan’s unemployment rate in April was eight points above the national average and second only to Nevada.

Black and brown workers continue to see elevated rates of unemployment, underscoring the persistent racial inequalities that have fueled protests in cities throughout the country. The jobless rate for African Americans in May was 16.8% — slightly higher than the April figure. Unemployment for Latinos dropped from 18.9% in April to 17.6% last month.

Revised figures from the Labor Department show job losses in March and April were even larger than initially reported. Weekly unemployment claims show more than 37 million Americans are either receiving jobless benefits or applied recently and are awaiting approval.

“Although today’s report feels like a relief for many, it’s important to remember the labor market still faces an unemployment rate at the highest level since the Great Depression with tens of millions of Americans still out of work,” said Daniel Zhao, senior economist with the job-search website Glassdoor. “While the labor market may be on the path to recovery, there is still a long way to go until the labor market returns to pre-crisis levels and makes up for lost growth.”

Job gains in May reflect a turnaround for some of the industries hardest hit by the lockdown. Bars and restaurants added 1.4 million jobs, after losing 6.1 million in March and April.

Bartender Susan McAleer was laid off on St. Patrick’s Day from a restaurant in Philadelphia. She says the extra $600 a week in benefits the federal government authorized during the pandemic has been a critical lifeline.

“That makes all the bills payable,” she says. “But I also don’t know what’s going to happen after July when they cut if off.”

McAleer is doubtful about returning to the restaurant, which used to serve a lot of tourists and theatergoers, before those disappeared. She also wonders how servers will be able to do their jobs while limiting contact in a tight space.

“You can’t even have salt-and-pepper shakers,” she says. “Do we have to salt and pepper everybody’s food?”

Retail, construction, and manufacturing also made up some of the ground they lost in March and April. Health care added 312,000 jobs last month as doctors and dentists reopened offices, after shedding 1.5 million jobs in April.

Sara Goldberg doesn’t expect to go back to her old job as a medical assistant in South Portland, Maine. The office where she worked has embraced online visits during the pandemic, and Goldberg thinks it may stick.

“I talked to some friends who said, ‘I had my physical via telemedicine and it was great,’ ” Goldberg says. “And the thought went through my head, ‘Well, there goes my job.’ “

She applied for work at a nearby school district, but the economic crisis has put a huge dent in state and local government coffers.

“I found out just yesterday that because of budget constraints, they aren’t filling any of the open positions right now,” Goldberg says. “I guess I’m going to have to get creative.”

State and local governments cut another 575,000 jobs last month, after cutting more than 900,000 jobs in April.

The trouble with panic buying during an outbreak