Here are the latest updates:

08:35 GMT – WHO reminds safety is ‘first and foremost’ priority

Safety of a prospective vaccine for COVID-19 comes “first and foremost”, said the World Health Organization’s chief scientist, as a trial of a candidate from AstraZeneca was temporarily paused due to concerns over side effects.

“Just because we talk about speed…it doesn’t mean we start compromising or cutting corners on what would normally be assessed,” Soumya Swaminathan said on a social media event.

“The process still has to follow through rules of the game. For drugs and vaccines which are given to people, you have to test their safety, first and foremost,” she said.

The Czech Republic reported a record one-day spike in COVID-19 infections, with 1,164 new cases, as it battles a surging spread of the coronavirus.

The spike in Czech cases has been among the fastest in Europe, however, the death toll has remained lower than in many other EU countries, with 441 fatalities reported as of Wednesday out of a total of 29,877 cases since the start of the pandemic.

Hospitalisations have risen in the past week but are still half the levels seen earlier in the pandemic.

Russia said 142 people had died from the new coronavirus in the last 24 hours, raising the official death toll to 18,135. 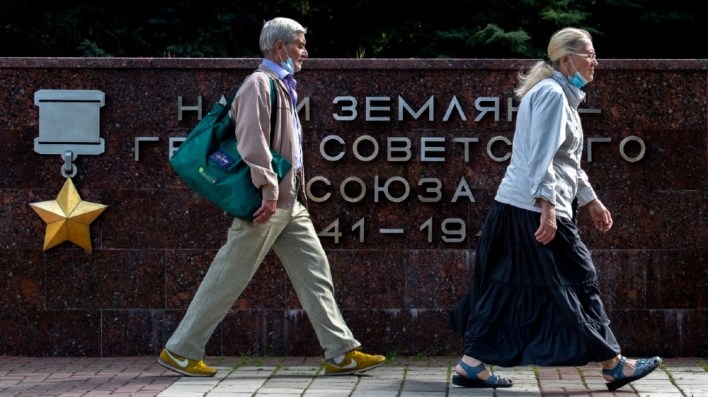 A woman and a man wearing face masks to protect against the coronavirus disease walk past a WWII monument in the town of Chekhov, some 70 km outside Moscow [Yuri Kadobnov/AFP]

Sharing a video on social networks, Lula condemned Bolsonaro’s handling of a crisis that has killed almost 130,000 people in Brazil.

“Yes, it would have been possible to prevent so many deaths,” said the former Brazilian President, adding that the country is “going through one of the worst periods in its history”.

Brazil, with more than 4 million cases, is the third country in the world most affected by the pandemic, behind the United States and India.

Tough new lockdown restrictions on social gatherings across England are to be announced as British Prime Minister Boris Johnson tries to control a resurgence of coronavirus infections.

From September 14, gatherings will be limited to no more than six people with fines for those who fail to comply as the number of cases in the UK has begun to rise sharply again in recent days.

06:43 GMT – The business of going out of business booms in S Korea 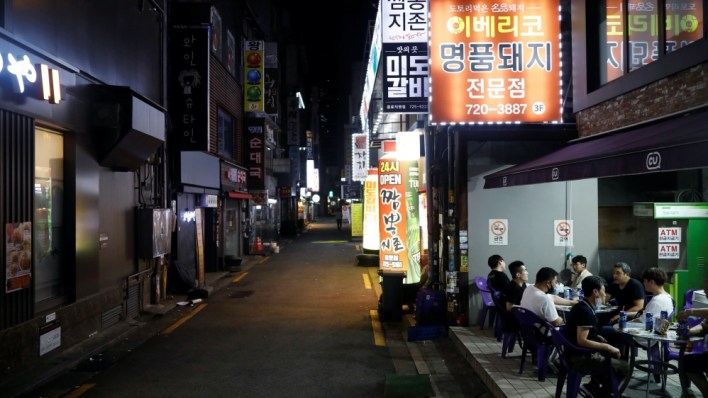 People drink outside as tougher social distancing rules that have been announced on the last Friday continue, in Seoul, South Korea [Kim Hong-Ji/Reuters]

You Young-sik has tried his luck running businesses, but after his convenience store, a sausage factory and a second-hand furniture shop all failed, he realised he had found a niche, one that he understood well: helping people go out of business.

You says he is now busier than ever due to the resurgence of the coronavirus, tearing down sign boards and removing cash registers from shuttered hair salons, barbecue buffets and other enterprises whose business model was based around human contact.

Britain’s Health Secretary Matt Hancock said that AstraZeneca’s decision to pause its coronavirus vaccine trials was a challenge but would not necessarily set back efforts to develop a vaccine.

“It is obviously a challenge to this particular vaccine trial,” Hancock said on Sky News when asked about the pause in the trial. “It’s not actually the first time this has happened to the Oxford vaccine.”

Asked whether it would set back the vaccine development process, he said: “Not necessarily, it depends on what they find when they do the investigation.”

Hello, this is Virginia Pietromarchi taking over the coverage of the coronavirus pandemic from my colleague Kate Mayberry in Kuala Lumpur.

The Czech Republic has just reported 1,164 new cases of coronavirus.

That is the highest number it has reported in a single day and comes as countries around Europe battle a resurgence of the disease.

India has been reporting the world’s largest single-day increases in cases for a more than a month. Its death toll has also been rising by at least 1,000 a day for eight days straight.

The World Health Organization’s Tedros Adhanom Ghebreyesus has stressed again that governments can take concrete steps to tackle COVID-19 even before a vaccine becomes available.

READ MORE:   Global Brands Need China’s Consumers to Spend. They Might Have to Wait.

Tedros was speaking by video to health ministers at the opening of the 73rd meeting of the WHO South-East Asia Regional Committee, which includes Indonesia, Thailand, Timor Leste, Sri Lanka and the Maldives.

“We need not wait for a COVID-19 vaccine. There are steps that countries can take. Prevent amplifying events. Save lives. Empower communities. Reinforce core measures and Isolate, test and trace” – WHO DG Dr Tedros at #RC73’s inaugural session pic.twitter.com/7uFCRxSXww

03:45 GMT – Cathay Pacific to ship half its fleet to desert

Demand for international flights has collapsed along with the pandemic and border closures, and Hong Kong carrier Cathay Pacific is now studying plans to send as much as half its fleet to the Australian desert, according to the South China Morning Post.

Cathay has 180 passenger aircraft and said previously it would mothball about a third of them, but with little indication long-hail demand will recover it is planning to increase that number, the Post said.

The airline has already sent a number of planes for storage in Alice Springs.

The Moria camp on the Greek island of Lesbos has been partially evacuated after a series of fires.

About 13,000 people live in the camp and are currently under a two-week quarantine after a case of coronavirus was confirmed on September 2.

Refugee support group Stand By Me Lesvos said on Twitter the entire camp was ablaze. 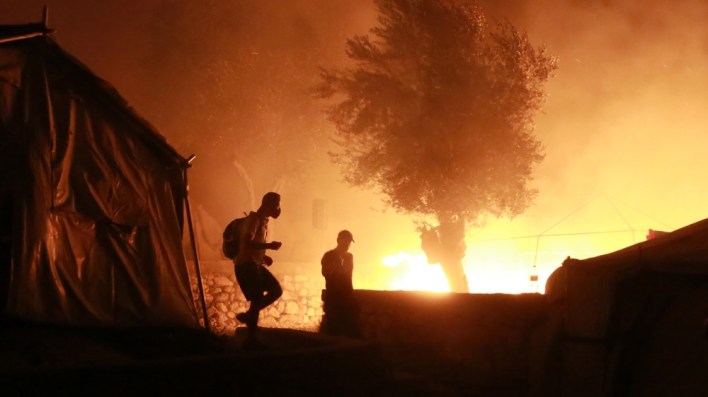 Fires at Greece’s overcrowded Moria camp, where a two week COVID-19 lockdown was imposed at the beginning of the month, have forced people to evacuate [Manolis Lagoutaris/AFP]

Joe Biden and running mate Kamala Harris have weighed in on the issue of a COVID-19 vaccine.

In a joint statement they accused Republican rivals Donald Trump and Mike Pence of using the vaccine as a “political tool”.

“We see it as a product of science and research,” they said. “Its timing, approval, and distribution should be without regard to political calculation.” 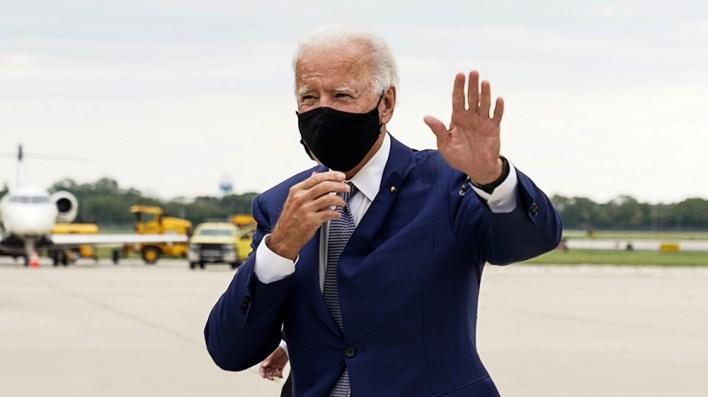 South Korea has now managed to keep coronavirus cases below 200 for a week.

Numbers just in show the country reported 156 new cases on Wednesday as it deals with a wave of infections that began in the middle of last month and have been linked to a church and a right-wing political rally.

Conservative groups have planned another demonstration for early October, coinciding with the Chuseok festivities, one of the country’s biggest traditional holidays.

The United Nations says disruptions caused to health services because of the pandemic could reverse decades of progress in reducing child mortality and put millions of lives at risk worldwide.

New mortality estimates published by UNICEF, the World Health Organization and the World Bank Group show deaths of under-fives fell to their lowest level on record in 2019. Last year around 5.2 million children died due to preventable illness, compared with 12.5 million in 1990.

“The global community has come too far towards eliminating preventable child deaths to allow the pandemic to stop us in our tracks,” said Henrietta Fore, UNICEF executive director.

Lots of reactions have been coming in to the news that the phase three trials of AstraZeneca’s potential vaccine have been suspended.

Australia’s Deputy Chief Medical Officer Nick Coatsworth says he is “not worried about it” and that the temporary halt does not mean the vaccine is “off the table”.

“In some respects this is a very positive thing because it shows that despite the accelerated vaccine development, safety is the priority of the clinical trialists and investigators,” Coatsworth told Sky News.

Science is hard. This is why we have to let the trials play out

I remain optimistic we will have a vaccine found to be safe and effective in upcoming months.

Hmmm—Oxford/AstraZeneca vaccine trial temporarily suspended because of 1 adverse event. “hold was placed on trial out of “an abundance of caution”

Dear @realDonaldTrump, this is why we do trials, do them well, to their completion. No EUA please. #COVID19 https://t.co/gRiXaL0TZu

AstraZeneca says it has “voluntarily paused” a clinical trial of the vaccine it is developing with the University of Oxford after one of the volunteers developed an unexplained illness.

“As part of the ongoing randomized, controlled global trials of the Oxford coronavirus vaccine, our standard review process was triggered and we voluntarily paused vaccination to allow review of safety data by an independent committee,” a spokesperson said in a statement.

The vaccine has been seen as one of the most promising of those in development. You can read more on the suspension here.

Victoria has reported 76 new cases of coronavirus and 11 deaths over the past 24 hours.

The state in southeastern Australia has imposed a strict lockdown and curfew in Melbourne to try and bring the disease under control.

#COVID19VicData for 9 September, 2020.
Yesterday there were 76 new cases reported and we are sad to report 11 lives lost. Our condolences to all those affected. More information will be available later today. pic.twitter.com/ikKiuRV4ZW

Read all the updates from yesterday (September 8) here.

Why Did Tesla Have Battery Day? Why Did It Reveal The Semi Years Ago?

GoFundMe for ice cream shop employee who quit after being harassed by customers nears $40,000