Hong Kong (CNN Business)Qantas Group is halting all international flights after the Australian government told citizens to avoid overseas travel because of the novel coronavirus pandemic.

Scheduled international flights operated by Qantas and Jetstar will continue until late March to help repatriate Australians, and will then be suspended until at least the end of May, Qantas said in a statement on Thursday.
The move comes just days after the carrier said it was reducing international capacity by 90%.
Qantas is also now acknowledging that a lot of people will not be paid as the company temporarily suspends two-thirds of its 30,000-member staff.
Employees can tap into annual leave, receive leave at half pay or access leave in advance of earning it, according to the statement.
“Unfortunately, periods of leave without pay for some employees are inevitable,” the company said.
Qantas also said it will reduce domestic flights by 60% and focus on cutting frequency.
All major airlines have been hit by the worsening coronavirus pandemic. As demand for travel all but evaporates, the aviation industry is facing its worst crisis in history. Industry watch groups warn losses could top $100 billion and are urging governments to bailout airlines before they go bankrupt.
Carriers across the world have significantly reduced capacity, slashed executive pay and warned of job cuts ahead.
So far, few airlines have taken the dramatic step of halting flights all together. Those that have include Austrian Airlines, Royal Jordanian, Ukraine International Airlines, and low cost Philippines carrier Cebu Pacific. 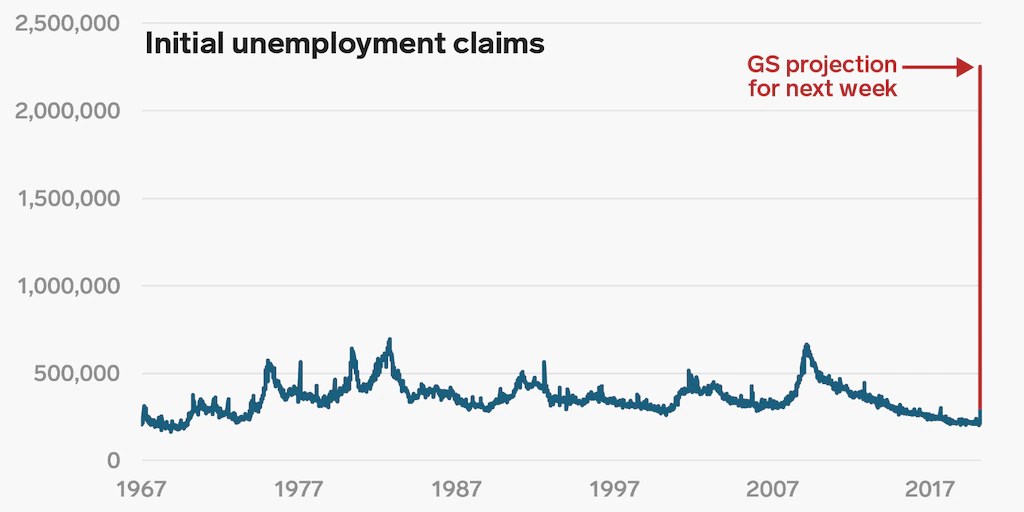 ‘An unprecedented surge in layoffs’: Goldman Sachs says US jobless claims could spike to a record 2.25 mi..