Stocks were gathering momentum higher Tuesday, coming off intraday lows as investors fight to shrug off worries about renewed coronavirus lockdowns in Europe and rising political uncertainty in the U.S.

Rising COVID-19 cases and threats of renewed lockdowns in Europe kept a lid on the market’s gains on Tuesday, along with heightened U.S. political rancor ahead of November’s general election.

Bitterness in Washington has investors worries about the dimming prospects for an agreement between congressional Democrats and the White House on additional fiscal aid during the pandemic—a prospect complicated by the looming battle over a nominee to replace Ruth Bader Ginsburg, who died Friday, on the Supreme Court.

“The lack of new fiscal stimulus, unclear direction over coronavirus policy and now an intense Supreme Court-related political battle is causing a new level of angst in the markets,” said Kenny Polcari, managing partner at Kace Capital Advisors, in emailed comments. “Both political parties are now in a full flight with just a few weeks until election day. The U.S. election has begun to spin out of control.”

See: Stock-market ‘anxiety will only intensify over the next 60-90 days’ warns expert who profited in 1987 and 2008 crises

Concerns also have been rising about a second lockdown in parts of the developed world, contributing to anxiety over the prospect of renewed restrictions in the U.S.

“I don’t believe we’ll have a second lockdown in the United States, but it’s a simmering concern for investors and the markets,” Polcari said.

Equities have been under pressure for much of September, with major benchmarks suffering three straight weekly declines. Tech shares have bore the brunt of the selloff, but have outperformed sectors more sensitive to the economic cycle this week.

“Coronavirus concerns have resurfaced, worrying investors that a reversal in reopening progress could be near. More and more uncertainty is arising as we get closer to the election but no closer to congressional fiscal relief,” said Lindsey Bell, chief investment strategist for Ally Invest, in a note. “But we’re still optimistic this dip will be bought sooner rather than later.”

“That appears logical to us as tech firms may be the least affected in case of a second round of lockdown measures around the globe,” he said.

That has investors keenly focused on rising COVID-19 cases, after the U.K. moved to reimpose some lockdown restrictions. Federal Reserve Chairman Jerome Powell on Tuesday told lawmakers it’s up to them to provide relief to some troubled companies, as doubts remain over prospects for another aid package. Powell and Treasury Secretary Steven Mnuchin testified Tuesday before the House Financial Services Committee about the status of pandemic aid.

In the hearing, Powell pushed back on a suggestion the Fed lower the threshold for loans under its Main Street Lending Program to make loans available to smaller companies. Powell said there was little demand for loans below $1 million and that redesigning the program would require the Fed to start from scratch.

On the economic front, data showed existing-home sales in August rose by 2.4% to an annual rate of 6 million, the fastest pace in nearly 14 years.

Which companies are in focus?

What are other markets doing?

The yield on the 10-year Treasury note
TMUBMUSD10Y,

was up 0.3% after jumping 0.7% Monday as investors looked for havens amid a global equity selloff.

were up marginally to $39.60 a barrel on the New York Mercantile Exchange, attempting to bounce back after a steep fall in the previous session.

remained closed for a public holiday. 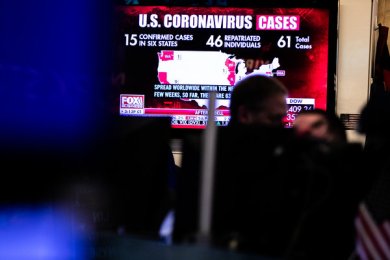 Silicon Valley IPOs are being celebrated in parking lots and conference rooms, as CEOs navigate pandemic and wildfire smoke