The offering could eclipse the $29 billion raised by Saudi Aramco’s initial public offering, which listed last December on the country’s local market. If Ant’s numbers hold, it would become the newest largest IPO in history. That’s fitting of the world’s most valuable private tech unicorn, last valued at $150 billion in 2018 after a record $14 billon funding round. Now, it is targeting a public valuation of $225 billion.

So, what exactly does Ant do, and why is it so valuable?

The company’s core product is Alipay, the most popular digital payments app in China that boasts a more than 50% share of China’s massive mobile payments market. Experts don’t see the mobile payment revolution withering any time soon, and Alipay is the global king in mobile payments. It also sells tech services to other Chinese financial and e-commerce businesses.

Alipay launched in 2004 and hit 1.2 billion users last year. Almost all of its growth has come in Asia, though Alipay has signed a slew of U.S. partnerships with chains like Walgreens (WBA) and Neiman Marcus to let Alipay customers from China pay with Alipay when shopping in America.

Last year, Ant opened up its app to American tourists in China — before the COVID-19 pandemic put a prolonged halt to global tourism.

And then there’s Yu’ebao, which is China’s largest money-market fund, with $170 billion in assets. Ant Group owns that, too.

Ant’s public offering will stand apart from the new unicorn IPO parade about to happen in America: Airbnb, DoorDash, Snowflake, and Palantir (via directing listing) are all aiming to go public by the end of this year — but none are profitable yet.

Ant Group, in contrast, is wildly profitable. In its IPO filing, it reveals $3.2 billion of profit in the first half of 2020 ($10.5 billion in revenue), reflecting year-over-year growth of 1,000%. And that eye-popping profit came during a global virus outbreak.

Daniel Roberts is an editor-at-large at Yahoo Finance and closely covers tech. Follow him on Twitter at @readDanwrite.

Airbnb has been brutalized by the pandemic, but will IPO anyway in ‘forgiving’ market

Apple has less to fear from antitrust regulators than Facebook, Google, and Amazon 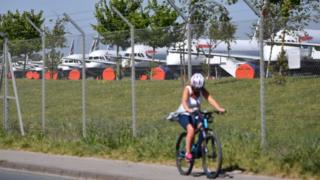