After a blowout quarter, Peloton is considering ways to make its expensive, high-tech workout equipment more affordable and accessible to a larger audience, according to its CEO.

One way it might go about that is by renting out its pricebikes and treadmills in the future, CEO John Foley told CNBC’s “Squawk Box” Friday morning, on the heels of Peloton’s eye-popping earnings report.

Five or 10 years from now, Foley said he’d be “surprised” if Peloton didn’t have a rental option in place for its gear. “It’s not something you are going to see in the next year. … But I love moving in that direction,” he said. “It’s all in the name of affordability for our members and making sure they feel incredible about the value.”

In theory, this initiative could allow more people to try Peloton’s products for a few months before they decide to buy. Peloton currently offers a 30-day at-home trial. It has proven that once people test its products, many of them get hooked. Average net monthly connected fitness churn during its fiscal four quarter was 0.75%. And the company is forecasting fiscal 2021 churn will remain under 1%.

Earlier this week, Peloton announced the launch of two new items: A lower-priced treadmill and a more expensive bike option with a rotating screen. That also meant it dropped the price of its original spinning bike.

“We do think as we grow … globally, price points for our products [are] going to matter, so we are getting out in front of it,” Foley told CNBC Friday.

During a post-earnings conference call with analysts, Foley also hinted at Peloton selling used bikes one day in the future. The company is allowing customers who currently have the original spinning bike to trade that version in for the new Bike+, which means Peloton is going to have a stock of used bikes on hand.

With gyms nationwide forced shut for periods of time during the coronavirus pandemic, people seem to be turning to their Peloton equipment more than ever to break a sweat at home. Even as gyms reopened, many people remain hesitant to return.

Peloton’s connected fitness subscribers, which pay $39 per month for content on the Peloton app, are averaging 24.7 monthly workouts, up from 12 a year earlier. This is due in part to the company launching more non-cycling workouts, like yoga and stretching, on its app. And the rotating screen on the new Bike+ is meant to allow users for a more seamless transition between a Peloton bike workout and a floor workout.

Peloton shares were up about 11% in premarket trading Friday, putting them on pace to hit an all-time intraday high. The stock is up more than 200% this year. Peloton has a market cap of $24.9 billion.

Why a US TikTok sale is easier said than done

One shot of coronavirus vaccine likely won’t be enough 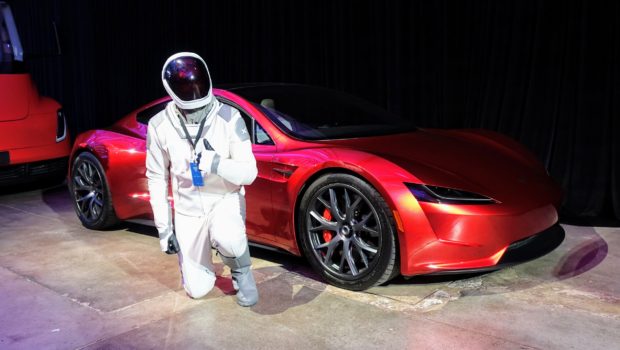 Tesla Roadster Will Really Use SpaceX Rocket Thrusters — Because Elon